Have you discovered the delights of the lychee fruit? The white flesh of this fruit tastes a bit like strawberry with notes of citrus and rose.

Maybe your dog has also learned how delicious lychee can be. Now you are wondering whether it is safe to feed your pet lychee as a treat.

Here’s the short answer to this question: Yes. You can safely feed lychee to your dog in small amounts. But to give a longer answer, we need to discuss the health benefits and concerns of lychee for canines.

We will begin with the basics. Not familiar with lychee? This fruit is produced by a tree indigenous to China. It is most prevalent in Asia but has started to find its way around the globe.

Each lychee fruit is small and has a reddish-pinkish rind with a spiky texture. Open the skin, and you will find the white flesh of the fruit inside.

Is Lychee Safe For Dogs?

In small quantities, the flesh of the lychee fruit is safe for dogs. The rind and the seed of the fruit are not safe to feed your dog, however.

Health Benefits of Lychee for Dogs

Did you know that in moderation, lychee can be good for your pet? You can view the nutritional data for raw lychee fruits here.

100 grams of lychee fruit contains modest amounts of potassium, phosphorus, iron, copper, and manganese. It also provides small amounts of B vitamins along with 119% of your daily recommended value of vitamin C. The fruit contains a little bit of protein and fiber as well.

Vitamin C isn’t just great for you—it is also great for your dog! The American Kennel Club writes, “Vitamin C is an important antioxidant. It scavenges potentially harmful free radicals in the body and can help reduce inflammation and cognitive aging. Dogs can actually synthesize vitamin C on their own in their livers, but in some cases supplementation may offer health benefits.”

The AKC also talks about the importance of B vitamins for your dog’s metabolism, enzyme function, hormone regulation, and more.

The protein in lychee can support the health of muscles, hair, and skin. The fiber is good for your pet’s digestive system. Meanwhile, the minerals in the fruit are good for muscle and nerve function.

So, you now know that lychee is nutritious for your dog—awesome! But is there anything you should be concerned about?

There are a few potential issues. These include:

Just as you should not overindulge in sugar, your dog shouldn’t either, for many of the same reasons. Too much sugar is bad for dental health and promotes obesity.

Both the rind and the seed of the lychee fruit can choke your dog, so you should always remove them before giving your pet the fruit.

Plus, the seed itself contains a toxin called methylenecyclopropylglycine (MCPG). So, it could poison your dog if you do not discard it.

Finally, you might be wondering whether lychee fruits are toxic altogether, as there are reports of lychees causing fever and other symptoms in humans.

CNN reports, “Each year, hundreds of children in India alone may be hospitalized with fever, convulsions and seizures. A recent report revealed they are probably due to toxins from unripe lychees. Combined with low blood sugar or malnourishment, these toxins can result in even lower blood sugar, or hypoglycemia. They block the body’s production of sugar, which becomes especially dangerous when we sleep and our blood sugar levels naturally fall. This could lead to an encephalopathy.”

So, it is essential never to give your dog lychee that is under-ripe.

Additionally, lychee should never be fed to a dog that is malnourished or has low blood sugar. You also should not feed it to your dog on an empty stomach.

How Much Lychee Can Your Dog Eat? 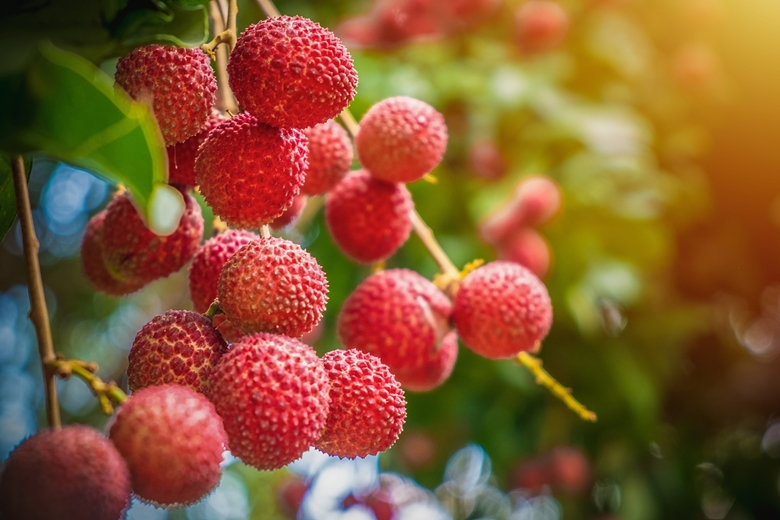 An appropriate serving size for your dog is just several bites of lychee. You should not give your dog lychee every day. A couple of times weekly is suitable.

Can a Dog Be Allergic to Lychee?

Whenever you introduce any new food to your dog, be alert to the possibility of an allergy. Most dogs are not allergic to lychees, but canine lychee allergies do exist.

If you notice itching, indigestion, hives, facial swelling, or ear or paw infections, those could be signs that your dog is allergic to lychee.

Is Your Dog Reacting Badly to Lychee?

If your dog consumes lychee that is under-ripe and/or has too much lychee, there may be signs of poisoning. Look for muscle spasms, drooling, dark urine, shaking of the head, weight loss, seizures, vomiting, diarrhea, or stomach cramps. Blood in stool or urine is another sign of possible poisoning.

If your pet shows signs of lychee poisoning or allergic reaction, contact your vet immediately.

How to Feed Your Dog Lychee

Here is the correct way to feed your dog lychee.

1. Remove the rind from the lychee. Throw the rind away where your dog cannot find it.

2. The lychee seed looks like a large, brown, oblong pit. Remove it from the center of the fruit. Throw it away, again where your dog cannot find it.

3. Give your dog a small piece of lychee fruit.

Start with just one little bite. Keep an eye on your dog to make sure he reacts well to the lychee. You can give him a few bites the next time.

Conclusion: Small Amounts of Lychee are Safe for Dogs

Lychee's delicious sweetness makes it an appealing treat not only for you but also for your dog. Now you know how to feed your dog small amounts of lychee safely. Have fun sharing this tasty fruit with your pal!

Can I feed My Dog Rambutan?

Can I Give My Dog Goji Berries?