It is hard to picture two dogs that look less alike than Pugs and German Shepherds, isn’t it? This mixed-breed combines the traits of its parent dogs into one adorable package of playful joy you won't be able to resist.

In this guide, we will share those traits with you in-depth. We will also tell you what you need to know about training, grooming, feeding, and caring for these energetic dogs we call “Shugs” for short.

Now that you know some trivia about German Shepherds and Pugs let's look at the appearance of the mixed breed Shug.

Pugs are medium-sized dogs, while German Shepherds are large dogs. We have seen a range of estimates for the size and weight of Shugs, so in our table, we gave the largest possible range, based on the minimum and maximum measurements for the parent breeds. How big or small your Shug is will depend on which genes are dominant.

Tan, black, brown, and cream are the most common colors for the coat. Pugs, as you know, have dark faces and light bodies. German Shepherds sometimes have this same distribution of colors, which is a common outcome with a Shug as well. But there can be variations.

The facial shapes of Pugs and German Shepherds are entirely different from one another. So, there is a degree of unpredictability in what the face of a Shug will look like. Sometimes it may be flatter like a Pug's. Other times, it could feature a longer nose like a German Shepherd's. In many cases, it will fall somewhere in between.

Likewise, the ears could resemble the floppy ears of the Pug or the upright ears of the German Shepherd. It seems most common for a Shug’s ears to be floppy.

Pugs are playful, affectionate dogs that like to get into mischief. German Shepherds share their loyal and loving nature but are also vigilant, courageous, and highly intelligent. So, your German Shepherd Pug cross could have any combination of these personality traits.

Whether he takes more after his mischievous Pug parent or his watchful German Shepherd parent, one thing is sure—he is going to be an affectionate companion who loves your time and attention. 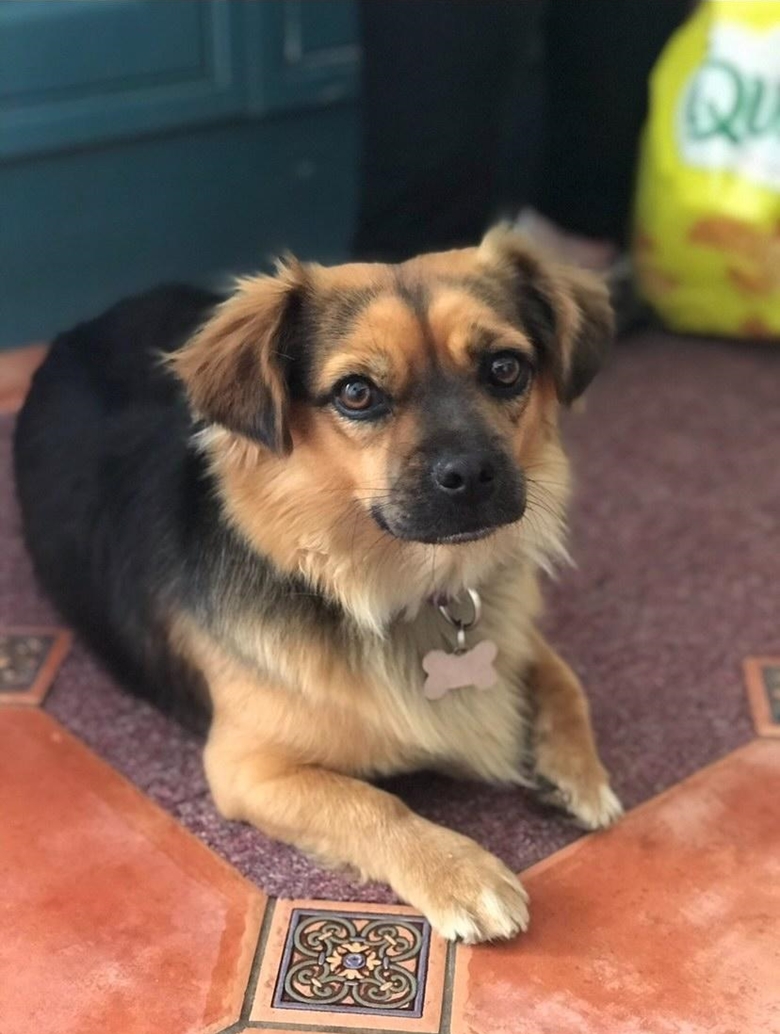 By now, you are probably eager to call your local shelter to see if there are any Shugs up for adoption. But wait—you should first make sure that a Pug German Shepherd Mix will be a good fit for your home.

Pugs can easily become obese. On the other hand, German Shepherds are more likely to appear scrawny in their younger years. If you have a young Shug that appears skinny despite feeding him proper portions of a balanced diet, you can usually wait it out. As your dog gets older, he will put on weight naturally.

Be especially mindful of portion sizes and activity levels if your pet takes after the Pug parent. Do not let him gain too much weight. Gauging portions can be a bit tricky. An adult Pug only eats around 1 cup of food daily, whereas a German Shepherd can eat 2.5-3.5 cups per day.

Consider your dog’s size and metabolism as you shoot for a balanced middle ground. We suggest you ask your vet what they think is suitable.

That means that grooming requirements are similar regardless of which type of coat your Shug has. Brush once or twice a week to keep up with the shedding. Clean your pet's ears, trim his nails and brush his teeth as part of his grooming routine. Good news—you should only need to wash your dog once in a while.

Pugs and German Shepherds tend to have very different attitudes about exercise. While a German Shepherd might get frustrated with you for spending too much time on the couch when he wants to go out and play, a Pug might refuse to get off the couch!

There are two things to watch out for:

Is It Easy to Train a Shug?

Both Pugs and German Shepherds want nothing more than to please their human companions. That means that both breeds are highly trainable.

The German Shepherd is renowned for being incredibly smart and hard-working as well. So, training a Shug can be a real treat for you and your pet.

With proper care, your Shug can enjoy excellent health for many years. But it is essential to know what to watch out for. This mixed breed may inherit a susceptibility to any diseases that either parent breed is prone to.

None of this should worry you—every breed of dog in existence is prone to specific health issues. You just need to do your best for your pet.

Also, watch out for the fact that Pugs are “brachycephalic," meaning they have those short, flat noses. Dogs with these noses may sometimes get "brachycephalic syndrome," which is a respiratory problem. Whether you need to be alert for this depends on which nose shape your mixed breed inherited.

Cost of Owning a Shug

Adopting a Shug puppy could cost anywhere between several hundred and several thousand dollars. Want to save money getting a Shug so that you can spend that money on dog care instead? Adopting a Pug German Shepherd is a lot less expensive. Plus, you will be saving a life.

After the first year, annual costs for owning a Shug are estimated to be between $800 and $3,000.

GSDs and Pugs are both excellent breeds for a household with children. Pugs are generally good with other dogs as well. German Shepherds are rated as "moderate" concerning how they socialize with other dogs.

When you adopt a Shug, he should bond pretty quickly with other household members, human and canine alike. Just handle introductions to other dogs with care.

Is a Pug German Shepherd Mix Right for You?

A Shug might be a good fit for your household if:

Pros and Cons of Shugs

To review what we learned, let’s go over the advantages and disadvantages of Pug German Shepherds in summary form:

If you cannot decide between the mischievous, playful Pug and the intelligent, courageous German Shepherd, a Shug cross dog could be the best-of-both-worlds pet of your dreams.

Contact local shelters and rescues if you are ready to find your Shug. Somewhere out there, your future pet is waiting for you to bring him home.