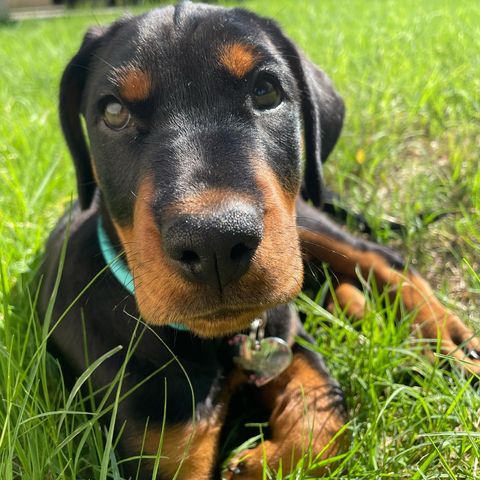 Searching for the ultimate guard dog? It may be that your perfect canine companion is the Rottweiler Doberman mix, also called a “Rotterman.” This cross-breed combines the protective traits of both its parents into a courageous and loyal pet that is smart and trainable.

Can you handle a Rotterman?

Is the Rottweiler Doberman a loud dog?

Cost of Owning a Rotterman

Is a Rottweiler Doberman Mix Right for You?

Pros and Cons of Rottweiler Dobermans

This guide will introduce you to everything you want to know about the Rottweiler Doberman Mix. Below, you can view a quick list of basic characteristics. Scroll down to learn in-depth about the Rotterman’s appearance, personality, care needs, and more..

1. The history of Rottweilers dates clear back to ancient Rome! Livestock traveled alongside the Roman armies to feed the soldiers, and Rottweilers were tasked with their herding. That was how the armies of Rome were able to traverse such great distances without running out of fresh, edible meat.

2. People used to use Rottweilers to protect their cash by literally giving it to their dogs to carry around their necks. This was a practice among both cattlemen and butchers. Indeed, the term “Metzgerhund” translates to “butcher’s dog,” and refers to a dog working in this role.

3. The Doberman Pinscher originally was bred by a tax collector named Herr Karl Louis Dobermann, who also worked as a dog catcher and police officer. It is easy to see how a person working this combination of jobs would come up with the Doberman Pinscher breed. Dobermann used his dogs to keep the money he collected safe as he transported it.

4. One brave dog named Kurt delivered a warning that saved the lives of soldiers during the Battle of Guam in WWII. While delivering his message, he was killed by a grenade. He was laid to rest in the United States Marine Corps War Dog Cemetery.

There are some strong similarities in the appearances of Rottweilers and Doberman Pinschers. The outer coat of the Rottweiler is medium, while that of the Doberman is short. Both dogs have a little bit of undercoat at the neck.

Coat colors for both breeds are largely black, with lighter markings in similar locations. So, the Rotterman also looks quite similar to both of its parents in terms of its coat and colors. Along with the black, there may be markings in mahogany, rust, tan, red, blue, fawn, or white.

Compared to the Rottweiler, the Doberman Pinscher has a sleek, streamlined look. The Rottweiler’s ears are floppy, while the Doberman’s stand up. Whether the build, ears or face of your Rotterman more closely resemble the Rottweiler or Doberman depends on what genes are expressing.

Just as the appearances of the Rotterman’s parents are similar, so too are their personalities. Both of these dogs were bred to be hard-working protectors. That means that Rotterman mix dogs likewise are vigilant and dedicated.

As smart, energetic dogs, Rottweiler Dobermans need daily exercise and mental stimulation. But their affectionate nature means that after a day of play, they also can enjoy a good cuddle.

Do You Need to be an Experienced Dog Owner to Handle a Rotterman?

The American Kennel Club says, “Rottweilers were originally bred to be guard dogs, so they do have the potential to be territorial, but they can also be extremely gentle and loving when they are properly trained and socialized. Training makes all the difference when it comes to a Rottweiler’s temperament.”

So, you do not need to be intimidated by the thought of owning a Rotterman. That being said, Doberman Pinschers can be stubborn, so it is possible for a Rotterman to have a stubborn streak. As medium-large dogs, neither of these breeds is huge, either, but a larger Rotterman that does not want to obey its owner can be hard for a beginner to handle.

Yes, it’s true—the Rotterman has an abundance of traits that make this mixed breed a desirable addition to your household. But are they easy or hard to care for? Let’s take a look at their requirements for nutrition, grooming, exercise and more.

While it is not possible to prevent every possible health problem, feeding your pet a balanced diet can go a long way toward protecting his health. So, what should you feed your Rotterman?

Harlingen Veterinary Clinic reports that Rottweilers may be prone to obesity. For that reason, it is very important not to overfeed Rottermans. The clinic adds, “Though it’s tempting to give your pal food when she looks at you with those soulful eyes, you can ‘love her to death’ with leftover people food and doggie treats.”

How much is the right amount of food? For both Rottweilers and Doberman Pinschers, around 2,100 calories per day is ideal. So, that goes for the mix of these two breeds as well. A large chunk of your pet’s daily calories should be comprised of protein (around 22-26%).

You can get away with doing a quick brushing of the smooth coat about once a week. If you want, you can also run a grooming mitt over your pet’s coat each day just to shine it up a bit (this would be most applicable if your dog takes mostly after his Doberman Pinscher parent).

Your pet will need a periodic bath. The frequency may be higher if the coat is most like that of the Rottweiler parent. It will be lower if your pet’s coat is more like that of the Doberman. As with any other dog, do not forget to trim your Rotterman’s nails and clean his ears.

Your pet is going to need plenty of daily exercise! Both parent breeds have high energy levels. Plus, with Rottweilers being susceptible to obesity, you are going to want your Rotterman to exercise as a form of weight maintenance. Long walks are perfect for Rottermans, as is play time in your backyard.

Is It Easy to Train a Rotterman?

With their intelligence and energy levels, both Rottweilers and Dobermans are highly trainable. Thus, the same is true for a mix of these breeds. Nevertheless, it is true that Doberman pinschers can be stubborn, which can get in the way of training.

The earlier you get started with training, the less likely it is that you will run into behavioral problems. Socializing your Rotterman properly can help ensure a manageable, obedient dog.

The best way to get an idea for the health issues that can affect a Rotterman is to take a look at those that can afflict the parent breeds.

MetLife says, “As many medium-to-large breeds like the Doberman Pinscher, hip dysplasia is a common issue. Dobermans also have a propensity for diseases like Von Willebrand's Disease (vWD), hypothyroidism, Wobbler's Syndrome, narcolepsy, and albinism.”

As you might guess, Rottweilers also have to watch out for hip dysplasia, given their similar size. Rottweilers may also experience other joint issues, eye problems, wet eczema, cold water tail, aortic stenosis, cancer, and other problems listed here.

Getting your pet the right dog bed can go a long way toward maintaining joint health.

Is the Rottweiler Doberman a Loud Dog?

You want a good guard dog—but that doesn’t mean you want your pet to keep you up at all hours. Will you be able to get some sleep with a Rotterman around?

The answer is “Yes!” Dobermans are moderate barkers, and Rottweilers are low barkers. So, even though this is a highly vigilant dog, he won’t bark at anything and everything. But you can still count on him to alert you if something is wrong.

Cost of Owning a Rotterman

Owning a Rottweiler Doberman mix sounds amazing, right? But how much does it cost? For a Rotterman puppy, we have seen estimates ranging widely between $300 and $3,000.

One way you might be able to save money is to instead adopt a Rotterman from a local shelter. This will usually cost you just a few hundred dollars. Plus, you will be giving a beautiful dog a forever home.

For both parent breeds, the average yearly cost of ownership is around $2,000. You can expect the same with a mixed breed.

Dobermans and Rottweilers are both highly affectionate dogs, which can make them good family pets. Dobermans are very good with kids, while Rottweilers are rated as moderately so. Both breeds can be okay with other animals, but it depends on how they are socialized since they can be territorial.

So, if you are adopting a mix of these two breeds, you should ask some questions about the dog’s socialization and training, as well as his personality. These will help you to determine whether he is a suitable fit for your household.

Is a Rottweiler Doberman Mix Right for You?

We have now wrapped up our detailed overview of care requirements. Based on what we learned, a Rotterman may be a good fit for you if:

Pros and Cons of Rottweiler Dobermans

The Rottweiler and the Doberman Pinscher both have reputations that are somewhat intimidating. But in truth, these vigilant dogs can be friendly and obedient with suitable socialization and training.

If you are ready to have a fierce protector looking out for you and your family, contact your local shelter to ask if there is a Rotterman waiting to find a new home.