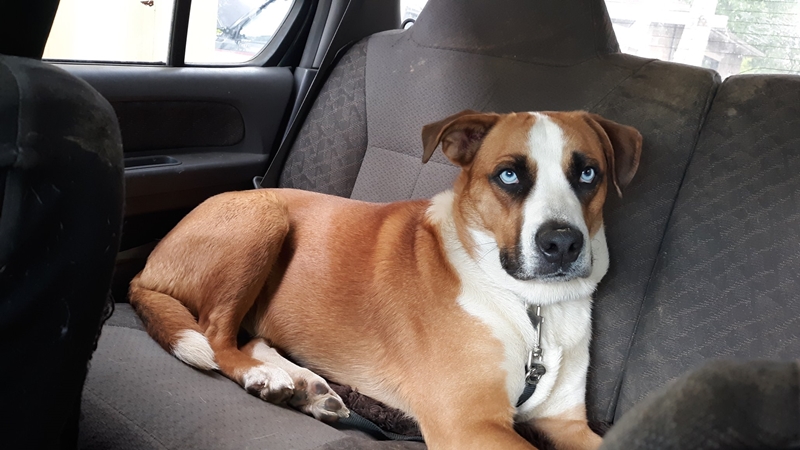 So, you want a dog that is as energetic, playful, and charismatic as you? If so, you might be thinking about bringing home a Boxer Husky mix known as a "Boxsky.”

These hybrid dogs are lively playmates and vigilant protectors, making them loyal companions for owners with the time and energy to keep pace with their needs.

Can I be frank with you? Boxskies can be demanding dogs. They need so much attention. But they are worth it, especially if like them, you also crave some extra attention!

In this guide, I am going to tell you everything you need to know about the Boxsky. We’ll go over physical characteristics, temperament, nutritional needs, health issues, exercise requirements and more. That way, you can figure out if a Boxer Husky mix might be right for you.

Let’s dive in with the enthusiasm as a Boxsky!

History of the Boxer Husky Mix

A Boxer Husky mix is a crossbreed of two working dogs: the Boxer and the Siberian Husky.

How long have Boxer Huskies been around? Well, nobody seems to be quite sure when the crossbreed originated. But we can talk about the history of the Boxer and the Siberian husky.

The Boxer breed dates back to 19th century Germany. It seems Boxers were originally hunting dogs. But most of them ended up in working roles, such as ranch dogs or armed forces dogs. Around the turn of the 20th century, they started showing up in the US.

The Siberian Husky also was a hunting dog. But the origin of the Husky dates back thousands of years. From Siberia, they made their way to Alaska and Canada to serve as sled dogs during the early 20th century. By 1930, the American Kennel Club had them registered.

Two Boxer Huskies may look quite different from one another, even in the same litter. This should not be all that surprising, considering that Siberian Huskies and Boxers look nothing alike. Depending on how their genes express in their offspring, each resulting pup might manifest different Husky or Boxer characteristics.

Now you know how this breed looks. Each expresses different Boxer and Husky traits and is uniquely gorgeous. But what kind of personality do Boxer Huskies have?

In a word … energetic.

Although Boxers and Huskies may look different, they are both lively work dogs. So while this mixed breeds vary in appearance, they all tend to share the boundless energy of their parent breeds. That means your dog is going to need a lot of exercise!

Since this crossbreed will need plenty of space for play, a house with a fenced-in yard may be more suitable than a small apartment.

Okay, why should your yard be fenced-in for your Boxsky?

Remember, they are descended from Boxer hunting dogs. When they are outside, they may feel an urge to pursue squirrels, cats, and just about anything else that moves.

As if that weren't enough, Siberian Huskies are notoriously stubborn and independent-minded. So both the Boxer and Husky heritage makes the Boxsky prone to wandering. But don’t let that fool you into thinking that this breed doesn’t need your attention. Even with that independent streak, they are incredibly social. Your Boxsky will probably want to play, and play, and play some more with you every day.

Not only that, but Boxer Huskies are loyal and brave guard dogs. For that reason, they may be a bit clingy at times. It isn’t just about getting your attention (though they want that too!). It is also about staying close to you so that you are safe.

A Boxer Husky may be prone to hip dysplasia. Issues with eyes and elbows are also common. Thankfully, they usually are pretty healthy.

Some less likely issues you should still be on the lookout for include serious eye problems like cataracts, thyroid problems, aortic valve disease, cardiomyopathy, and degenerative myelopathy.

Tip: A high-quality, appropriate dog bed for Boxer Huskies can provide essential support for your pet’s hips and elbows. Make sure that it is cool and breathable since your Boxsky is a brachycephalic dog. 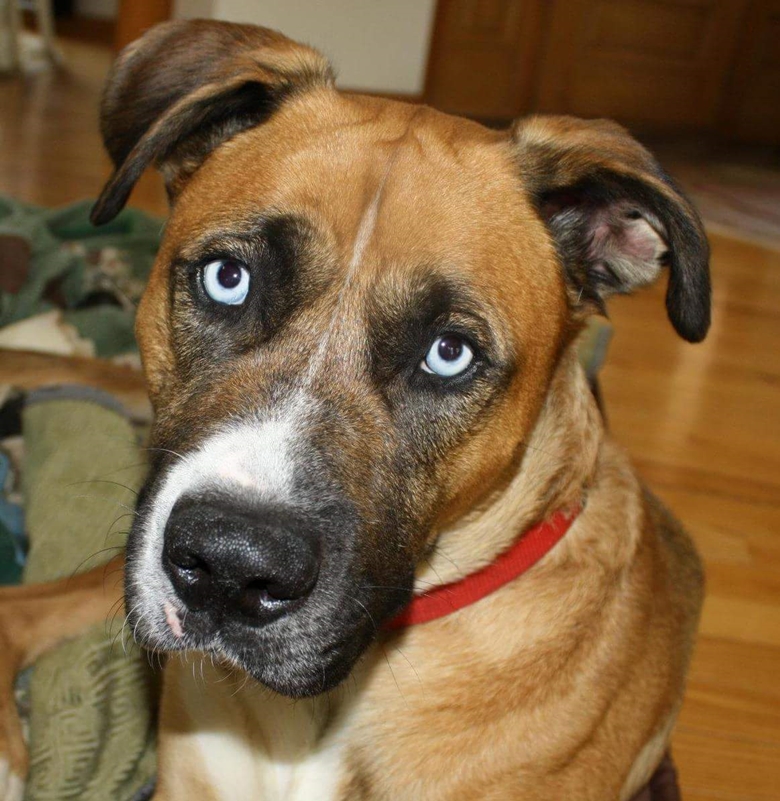 Everything sounds good so far? Great! Maybe this mixed breed will be the perfect canine companion for you. But let's talk a bit more about what these dogs need in terms of training, exercise, grooming and more.

That way, you can be sure that a Boxsky will be happy in your home.

They are super active, and they need a ton of daily exercise.

Your Boxsky should get around 70-80 minutes of exercise every day. That can include walking, running, and playing. Now you can see why a house with a yard is a much better environment for a Boxsky than an apartment. If you don’t have a yard for your dog to play in, you will need to take your pup on multiple long walks every day.

But with a yard for your dog, your pet can exercise without you, making it easier to keep up with your other commitments.

You would think that a dog that is a crossbreed between two working dog breeds would be easy to train. It’s true—the intelligence, sociability and attention-loving nature of these dogs can help you train them. And yes, Boxers traditionally are pretty easy to train. But Siberian Huskies? That's another story.

Huskies often prefer to go off and do their own thing. They may be stubborn and easily distracted. Those traits tend to be pronounced in the Boxer Husky mix, often overriding the trainability of their boxer parents.

It will be easiest for you to train a Boxsky if you adopt your dog while still a puppy, and begin training immediately. Do not put off important training until later. The older your pup gets, the harder it will be for you to train him effectively.

Even though the Husky mixed with Boxer breed doesn’t sport a long coat, it is a dense one, and there is plenty of ongoing shedding. That means that light daily grooming is necessary to keep up. And when your dog blows out his coat in spring and fall, you’ll need to do some extra grooming.

A de-shedding brush comes in handy during these blow-out phases. Other grooming tools that are useful for boxer huskies include combs, slicker brushes and rubber curry brushes.

As a large dog, a Boxsky requires plenty of fuel each day. How much? If you are giving your adult dog dry food, it will probably amount to around 3 cups split over two even servings a day.

Along with dry food, your Boxer Husky mix will likely enjoy vegetables, fruits, and meats as part of a balanced diet. The usual warnings apply when you are giving your dog food from your table. That means no citrus fruits, grapes, raisins, caffeinated foods, alcohol, macadamia nuts, foods high in sodium, or Xylitol-sweetened treats.

That is not an extensive list. Anytime you are giving your dog new food, look it up first to make sure it is safe for your canine. Start small too to check for allergies.

Will a Boxsky Get Along With Other Pets?

Whether a Boxer Husky mix will get along well with other pets depends on whether those pets are familiar or not. Be warned, if you abruptly introduce a new pet into your home environment, your Boxsky may not react well, particularly if he's an adult dog.

The new pet might be seen as an intruder. The same can also be true sometimes for other people's pets. The natural protective instincts of the this breed may take over, causing your dog to lash out.

However, this is not a universal trait, especially if you have trained your pup from a young age to socialize appropriately with other dogs. The good news is that this breed can get along very well with other dogs if you correctly handle the introduction.

If you were not able to participate in your Boxsky’s training as a puppy, you can still introduce him to other pets, or bring additional animals into your household.

You will just need to be extra slow and cautious during the introductory period. Once your Boxsky makes friends with another animal, his protective instincts will make him a loyal companion. His high energy levels will also make him a fun friend!

Are Boxer Huskies Good With Kids?

Boxers are known to be great pets for families, and Boxer Huskies take after them in that respect. Your Boxsky will probably adore your kids. Will your kids feel the same way?

That depends on how old they are as well as their dispositions. Some Boxskies can play gently and well, even with younger children. But many are too rough, and maybe more than little kids can handle.

But with older children, they are almost always ideal. Energetic kids will have a blast playing with the family's Boxer Husky mix each day.

Not only that, but you can rest assured that your Boxsky, ever the fearless guard dog, will protect your children from any perceived threats.

How Long Do Boxer Huskies Live?

Alas, Boxer Huskies do not inherit the 12-15 year lifespan of their Siberian Husky parents. Indeed, they don’t live as long on average as their Boxer parents either, who usually live for 10-12 years. If you take good care of your Boxsky and he remains in good health, he should be with you for 8-10 years.

What Does it Cost to Care for a Boxsky?

So, you love the idea of owning a Boxsky and have determined that one would be a perfect fit for your household. But can you afford to take care of one?

First of all, if you buy a puppy, you can expect to pay between $800-$1,000 or so. That being said, we urge you to adopt if possible! The fact is that there are many Boxer Husky mixes out there in need of a forever home.

As for medical expenses, thankfully, those may be lower for a Boxsky than for some other breeds, which are more prone to health problems.

But the exact amount that you will spend will depend on your individual dog's health as well as care decisions you make regarding pet insurance and so forth.

Pros and Cons of the Boxer Husky Mix

Let’s quickly review the pros and cons of the Boxer Husky mix.

To sum up, Boxskies are big, exuberant dogs that combine the physical traits and temperaments of Boxers and Huskies. Although they are not the longest-lived dogs, they tend to be relatively healthy. They do demand a lot of attention and exercise, but they will reward you for that dedication with steadfast devotion.

Ready to get a Boxsky of your own? Contact your local pet shelters. The Boxer Husky mix of your dreams may be waiting for you right now.

16 Beautiful Colors and Patterns of a Cockapoo