Get to Know the Pomeranian Golden Retriever Mix

Do Cockapoos Shed? 4 Reasons Why and Shedding Tips

If you are looking for a dog that is highly social, relatively active, and has the potential to be an affectionate family pet — you might consider getting a Boston Terrier Pitbull Mix. This hybrid breed is a mix of the Boston Terrier and the Pitbull (the latter of which is also known as the American Pit Bull Terrier, the American Staffordshire Terrier, or the Staffordshire Bull Terrier).

Given the traits of the shorter, more mellow Boston Terrier, and the larger, usually more aggressive Pitbull, the Boston Terrier mixed with Pitbull reliably has some combination of these features. But what else do you need to know about the Boston Terrier Pitbull Mix? This article will explore the history and characteristics of Boston Pit Mixes and provide information on the breed's care, potential health issues, and ideal suitability for family ownership.

The Pitbull is a descendant of the English bull-and-terrier, a now-extinct breed of dogs that was a mix of the Old English Bulldog and the Old English Terrier. Bred for several generations in Great Britain and Ireland up until the middle 19th-century for blood sports such as hunting, cattle baiting, and dog-fighting—the English bull-and-terrier became known as a particularly aggressive breed.

The English bull-and-terrier descendants that remained in England (especially those from the town of Cradley Heath) became known as the Staffordshire Bull Terrier. Those that traveled with English and Irish immigrants to North America throughout the 19th century came to be known by different names.

Eventually, the AKC recognized the breed and named their organization's specimens the American Staffordshire Terrier, starting from 1936. The AKC's distinction was that these dogs would no longer be intentionally bred for hunting or fighting purposes.

Pitbulls are typically 17 to 19 inches in height and can weigh anywhere from 30 to 90 pounds. They have wide jaws, long bodies, and tails that are whip-like in shape. They have smooth, shiny short coats, squarish, pronounced muzzles, and high-set ears that fold over in a triangular shape. Behaviorally, they are athletic, playful, loyal, and friendly, but also can be very aggressive (at times seriously injuring or fatally attacking humans) due to breeding or poor nurture.

The Boston Terrier is a breed of dog that can trace its roots directly to a common ancestor — one who originated in Massachusetts in the 1870s. The 30-pound male dog, known as "Hooper's Judge" (after owner Rober C. Hooper), was an immediate mix of an Old English Bulldog and a white English Terrier.

Hooper's Judge and his descendants were further bred with French Bulldogs (a small-statured bulldog with short legs and upward-pointed ears) to become what is now known as Boston Terriers. The American Kennel Club (AKC) officially recognized Boston Terriers as a distinct breed in 1893.

Boston Terriers are typically 9 to 15 inches high at the shoulder and weigh up to 25 pounds. They have prominent black-and-white coats that are short, shiny, and can be described as "tuxedo-like" or "clean-cut." Their heads are squarish, their noses are flat, their ears point upward, and their muzzles are truncated. Behaviorally, Boston Terriers are active, clever, and well-mannered, but can also be stubborn and bark or act aggressively, especially toward other animals.

The Boston Terrier Pitbull Mix, therefore, is a relatively recent cross between these two somewhat related breeds (Boston Terrier and Pitbull). Its particular physical characteristics and temperament blend or combine both breeds and will be described below. 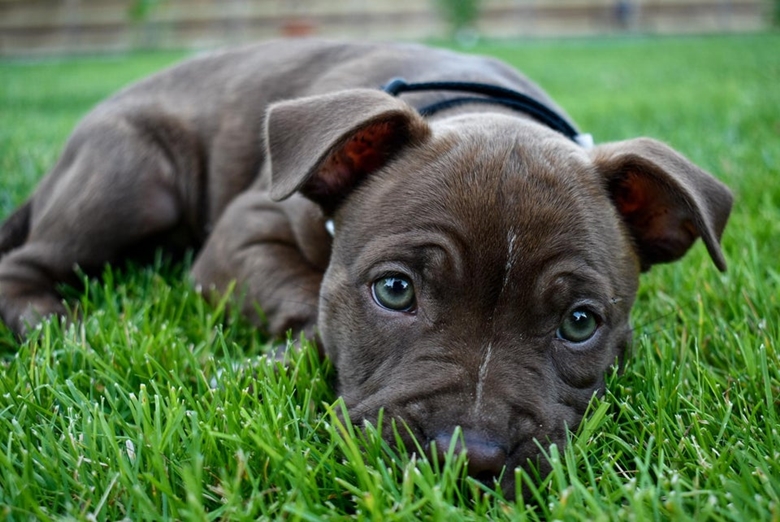 The Boston Pit's appearance will depend on which parent it takes after.  image via u/vic-808 / reddit

Size-wise, the Boston Terrier Pitbull Mix will be anywhere from 17 to 19 inches tall at the shoulder. Their weight can be around 25 to 30 pounds on the low end to about 60 pounds in larger dogs. If your Boston Pit Mix was bred from a large Pitbull or a small Boston Terrier, this could affect his size accordingly.

Typically, Boston Pit Mixes are the first-generation descendants of Pit Bulls and Boston Terriers—and their appearance reflects this. However, there is no telling how a Boston Pit Mix will appear, other than the breed will have a short, shiny coat, a powerful walking gait, triangular ears, and a fully-grown size roughly that of his parents.

Something to look out for is the Boston Pit Mix's ears — they will either be pointed upward (like a Boston Terrier's ) or fold downward (like a Pitbull's). This could be in contrast to the coat or face of either parent animal. The face may be flattened and square like a Boston Terrier or rounded and pronounced like a Pitbull. The face and other body proportions can vary, however.

The Boston Terrier Pitbull Mix's coat will be black, brown, bluish, red, or gray with large white patches (like the parent Boston Terrier). The dark portions of this breed's fur may be brindled (light colors against a darker background), and the nose color typically matches that of the dark coat areas.

The Boston Terrier Pitbull Mix's temperament has been described as social, attentive, friendly, alert, even-tempered, and even sweet. This is an active, highly social dog breed that requires 30 or 40 minutes of outdoor activity daily (like walks, play, or hikes) and thrives off a leading, firm, but positively reinforcing command.

That said, a Boston Terrier Pitbull Mix has also been known to be stubborn, as well as aggressive to other animals — especially if this breed has not been conditioned to see them as friends (or, at the very least, nonthreatening).

Boston Pit Mixes can not handle long periods alone (which can be a problem for those who work out of the house). Though this breed can be trained to be a good watchdog, they may still have instincts that could make them harder to restrain.

What ultimately decides a Boston Pit Mixes' temperament is his breeding and nurture. Before purchasing a Boston Terrier Pitbull Mix, it has been suggested to ask breeders about their dog's parents and their temperament and behavior.

You should socialize this breed around as many familiar people and animals as possible. A Boston Pit Mix is recommended for families with older children with calmer dispositions than younger children. This breed also can benefit from being introduced to and familiarized with other household pets early in life.

Finally, as this breed may act differently around strangers, you must give your Boston Pit Mix firm, but positive reinforcement training so that he can respond promptly to your commands. 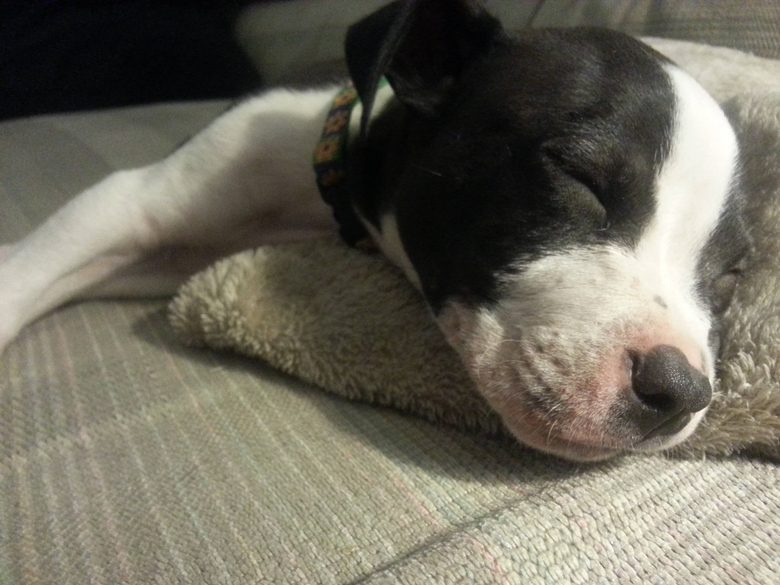 The Boston Pit Mix should be trained at an early age and given consistent exercise.  image via u/MrFeenytheWeeny / reddit

In order to care for a Boston Pit Mix, you must give him proper nutrition, training, grooming, and plenty of exercise.

The Boston Pit Mix requires about two cups of food each day, with one cup served in two parts during the day. Be sure to ask your veterinarian about specific food portions for your dog's build and weight.

Some sources have suggested dry kibble that is supplemented with raw pork or chicken. Chondroitin and glucosamine have been recommended as a supplement for the dog's joint health, but it is best to first consult with a veterinarian.

The Boston Pit Mix requires at least 30 minutes of activity a day, in the form of free running. Times of up to 40 minutes are often suggested to help control the animal's weight and condition his circulatory system. This can be done in conjunction with games, brisk walking, jumping and agility exercises, and other forms of moderately intense physical training.

The Boston Pit Mix will shed in moderate amounts, if at all. In this regard, they can not be genuinely considered a good breed for people with allergies since their Pitbull parent is not hypoallergenic. He should be bathed if dirty, but not so often as to dry out the natural fur protecting oils in his skin.

The breed can be brushed 2 to 3 times a week — and should be conditioned to have his teeth brushed twice during the week. His outer eye region should be gently cleaned with a soft, damp cloth during grooming periods.

The Boston Terrier Pitbull mix requires consistent training starting from early on in life. The breed benefits from a firm command, positive reinforcement, and food rewards. A professional dog trainer is also recommended for this period of the animal's life.

The Boston Pit Mix should also be socialized with many familiar and friendly people and animals early and often. This is to improve its natural social demeanor and responses to others' activities.

The breed finally benefits from consistent potty and crate training. This should be done as early as possible with the same dynamic as all other training.

The Boston Pit Mix comes from two established breeds that are prone to several health problems. First and perhaps foremost is obesity, from which other health problems can arise. Make sure your animal is fed and exercised adequately.

The Boston Pit Mix may be brachycephalic — generally the condition of having a short, broad skull and a "flattened" muzzle. This physiology, common in Boston Terriers, can result in brachycephalic syndrome, or difficulty breathing due to fleshy blockages in the animal's respiratory system. This is exacerbated in times of intense heat, stress, or exercise.

Hip dysplasia is the condition of a dog's hip joints not fitting properly and rubbing against each other. Often happening later in a dog's life, this condition can affect Boston Pit Mixes. Other internal joint and muscular diseases like elbow dysplasia and patella luxation can also occur.

Eye problems such as cataracts, glaucoma, "cherry eye" (inflammation of a dog's third eyelid), and corneal ulcers can all occur. Some of these eye problems can be prevented through gentle cleaning of the eyes during grooming.

Get to Know the Pomeranian Golden Retriever Mix

Do Cockapoos Shed? 4 Reasons Why and Shedding Tips