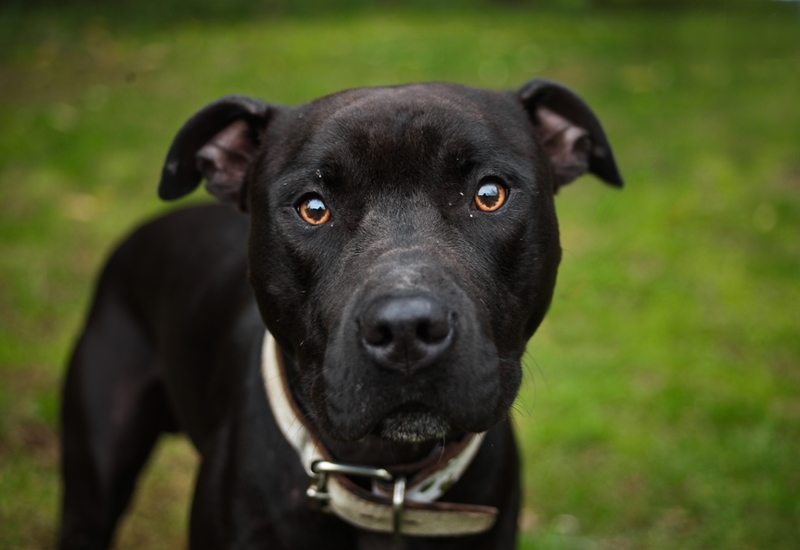 If someone tells you to picture a Pitbull, what do you see in your mind's eye? Many people will visualize a dog that is brownish in color or a mixture of brown and white. But did you know these loving and loyal dogs also come in black?

History of the Black Pitbull

Many people are scared of Pitbulls. The reason for this is why we call them Pitbulls in the first place. First of all, let's be clear—there is not just one breed of dog called "Pitbull." The name "Pitbull" can refer to:

The common ancestral link between Pitbulls is the bull and terrier, originally bred in the UK and later brought over to North America.

The purpose of breeding the bull and terrier dog and its descendants were for pit fighting with other dogs. These dogs also had to engage in rat baiting.

While dog fighting was big in the US during much of the 19th century, states began taking action against it in 1874. Dog fights and other types of organized animal fights became illegal nationwide in 2007.

It may surprise you to learn that the American Kennel Club (AKC) does not recognize the breed “American Pit Bull Terrier.”

AKC explains, “the American Kennel Club – founded as it was by well-heeled gentlemen who launched in Manhattan and shot over their Pointers on sprawling Long Island estates – did not want to be associated with the cruelties of the fighting pit. And so, in the late 1800s, Pit-bull enthusiasts were refused registration of their dogs.:

AKC continues, “It wasn’t until 1935, decades after another round of anti-dog-fighting legislation, that the Kennel Club in Britain formally recognized and registered the Staffordshire Bull Terrier. That paved the way for the American Kennel Club to recognize a subset of the pit-bull population in the United States a year later, after being assured by breeders that they would not allow their dogs to be used for dog fighting.” That breed has the name “Staffordshire Terrier.” 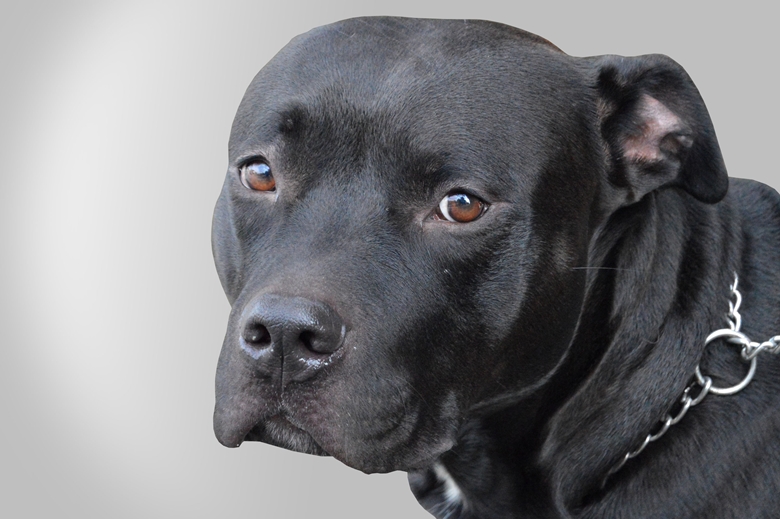 Black Pitbulls look just like other Pit bulls, except that their coats are black. They have fleshy noses, floppy ears, smooth, short coats, and straight tails.

While a black Pitbull may be completely black, many have some white on their chests and stomachs.

When a Pitbull is entirely black without any white at all, sometimes people refer to it as a "black panther Pitbull." But there is nothing else different about it; it is just a regular black Pitbull otherwise.

The genes responsible for giving a black Pitbull his coat color are KBky and KBKB. Whether a particular Pitbull is born with a black coat depends on the genes he inherited from his parents and which ones are dominant.

What is the Temperament of Black Pit Bulls?

Like other Pitbulls, black Pitbulls have affectionate, loyal, courageous personalities. They are confident, energetic, and friendly.

However, they can sometimes have stubborn streaks, and their attention spans can wane quickly. So, the earlier you can start training, the better.

How do you know if a black Pitbull will fit in well in your home environment? Let's look at Pitbulls' needs concerning space and socializing.

While having a house with a yard to exercise in is great, you can get away with keeping a black Pitbull in an apartment.

Be aware that some municipalities ban this breed. As unreasonable as these laws are, you must look them up before adopting a Pitbull. Make sure it is legal for you to have one.

Do Black Pit Bulls Get Along With Children?

Instead, they will understand that Pitbulls are affectionate, sociable, and loving pets because these dogs are great with kids.

Do Black Pit Bulls Get Along With Other Pets?

Pitbulls seem to have a range of personalities regarding how they relate to other animals.

ASPCA says, “Some Pit bulls were selected and bred for their fighting ability. That means that they may be more likely than other breeds to fight with dogs. It doesn't mean that they can't be around other dogs or that they're unpredictably aggressive. Other Pit bulls were specifically bred for work and companionship. These dogs have long been popular family pets, noted for their gentleness, affection and loyalty.”

What does your black Pitbull need in terms of exercise, training, and grooming? Let's take a look at basic Pitbull care.

Your Pitbull should get about 1-2 hours of daily exercise. So, plan on plenty of time walking and playing with your dog.

Additionally, these dogs are highly intelligent, which means they also need mental stimulation. Puzzle food toys might help you entertain your fur buddy and burn off excess energy simultaneously.

Pitbulls are certainly very trainable, given how smart they are. But sometimes, that stubborn streak could get in the way, as can the low attention span.

The best way to deal with these issues is to plan for short training sessions. You will accomplish more with a few short daily sessions than one long one.

Pitbulls have short coats that shed moderately. Since the hairs are so short, you probably will not notice them all that much around the house. Are they hypoallergenic? We would say they are neither the best nor worst in this category.

Since the coats are single coats, you do not have to worry about them “blowing” their coats.

You can get away with brushing your black Pitbull's coat just once a week, and bathing him every six months. Be sure to attend regularly to his teeth, nails, and ears.

One thing to note about Pitbulls is that they can sometimes have sensitive skin. Ensure any bath products you use on your pup will not cause dermal irritation.

Pitbulls are dogs that can quickly put on weight, so you need to watch out for obesity. Choose nutritious, healthy food, and give your Pit bull about 3 cups daily when he becomes an adult. Younger Pit bulls eat less. It is wise to consult your vet to ensure you are feeding your dog the correct portion sizes.

As we mentioned already, Pit bulls can be prone to skin sensitivities. Skin allergies are common as well.

Another potential issue is hip dysplasia. While this is a common condition across many dog breeds, it is extra problematic for Pit bulls. These dogs may also sometimes have issues with their kneecaps.

Pitbulls may sometimes develop cataracts and vision loss, especially as they age. Heart disease is something else to watch out for. A few other common health conditions in Pit bulls include degenerative myelopathy, which is a spinal cord condition, ichthyosis, a skin problem, and cerebellar ataxia, an issue that affects balance and coordination.

The smartest thing you can do to prevent and treat health problems in black Pit bulls is to take them regularly to the vet, even when they seem young and healthy. This will give you the best shot at catching problems early.

How much does a black Pit bull cost? In most cases, you can expect a price range of about $800 to $1,000. Sometimes, puppy prices might be as low as $200. If you do some research, you will quickly discover that this is in line with what you would pay for any other Pitbull.

If you want to save money on a black Pitbull (or any Pitbull), your best bet is to adopt instead. We also recommend adopting a black Pitbull to give a loving animal in a shelter a safe and healthy home. There are so many beautiful Pitbulls out there in need of care!

Where to Adopt or Buy a Black PitBull

Again, we strongly recommend the other option, which is to check around shelters in your area. There may already be a black Pitbull waiting in a shelter for someone who will love him to take him home.

Now you know all about black Pitbulls! Even though many people assume black Pit bulls are rarer or more aggressive than other Pitbulls, you now know the truth. They are pretty common and are just as sweet as other Pitbulls.

So, if you are ready to bring a new family member home, contact some of your local shelters. Ask them if they have a black Pitbull waiting to be adopted. Soon, you could be cuddling your new best friend.

That said, the AKC recognizes what it calls the "American Staffordshire Terrier," a type of Pitbull. And it does list black among the standard coat colors.

What causes blue eyes in black Pitbulls?
It may be melanin levels, the ALX4 gene, or the merle gene. Be aware that the presence of the merle gene can lead to vision problems in some dogs (that said, blind dogs can live happy lives if they are cared for by dedicated owners).

Are black Pitbulls different from other Pitbulls?
Not really, aside from the black coat color. They are in all other respects the same.