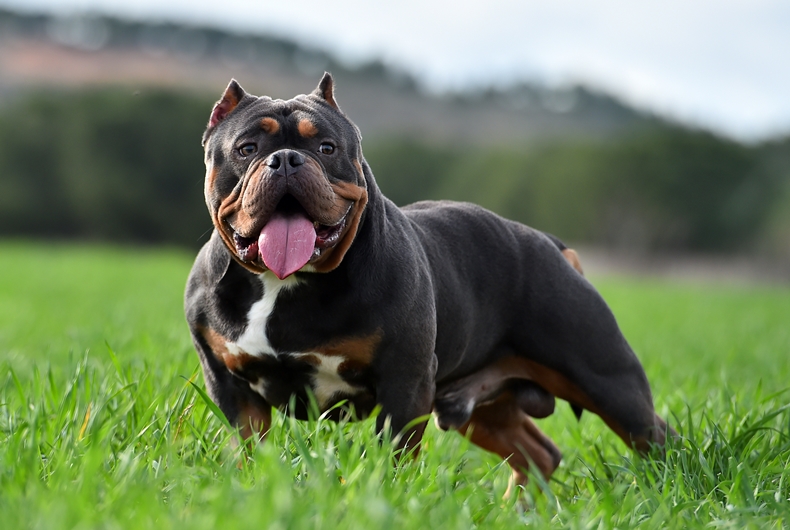 If you want to bring home a loyal, enthusiastic, affectionate companion that resembles a Pit Bull, you may want to get an American Bully. The American Bully received breed recognition in 2004 and is an ideal choice if you want a pet that will stick to you like glue.

In this in-depth breed guide, we will tell you all about the American Bully, including this breed's physical traits, personality, care needs, and more. We will also help you find where to buy or adopt American Bullypits.

History of the American Bully

Development of this modern breed started in the 1980s and continued into the 1990s. Breeding began with American Pit Bull Terriers. The United Kennel Club explains, “The APBT has maintained a characteristic appearance and temperament for over 100 years. As with any longstanding breed, several types evolved from the parent breed, with one in particular taking on a specific build and structure that is so unique it was wise to recognize it as a different breed altogether. That being the American Bully breed.”

Are American Bullies Pit Bulls? (No)

That being said, it is more complicated than that. The name "Pit Bull" is quite vague and informal. It is not a breed; it is an entire category of dogs. Depending on who is using it, it could refer to:

So, perhaps it is most accurate to say that American Bullies are a type of Pit Bull when we speak in the broadest sense. But they are not American Pit Bull Terriers, the dog most people think of when they talk about Pit Bulls. The UKC formally recognizes both as separate breeds. 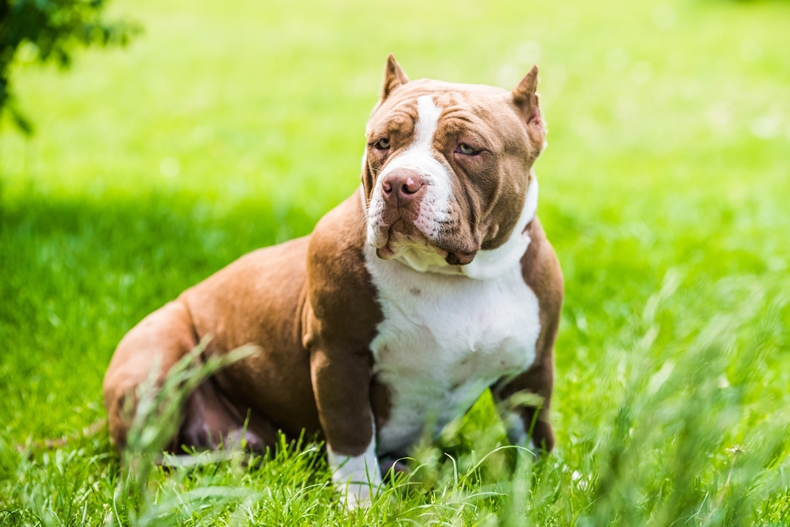 The ABKC recognizes four formal categories of American Bullies based on size and build.

The American Bully has a compact, heavy build, and a large, broad head. The cheek muscles are well-defined, the muzzle is short to medium, and the ears may be cropped, half prick, or rose ears. The eyes can be any color except pink or red and can be shaped like almonds or ovals. While blue eyes are "undesirable," they do not disqualify a dog.

This document provides a detailed overview of the appearance of the American Bully, including desirable and undesirable traits, disqualifying traits, and handy pictures to help you understand.

The short, smooth coat can be any color or combination of colors except for merle.

What is the Temperament of American Bully Pits?

The ABKC emphasizes that this gentle dog breed works well with children, other animals, and strangers. This is not a vicious or aggressive breed of dog.

The American Bully is a medium-sized dog that needs a reasonable amount of space. If you have a house with a backyard, that is best, but you may be able to get away with keeping an American Bully in a smaller home as well. You can take your pup on walks if you do not have a fenced-in yard.

Do American Bullies Get Along With Children?

Yes! In fact, this is one of the key benefits of an American Bully. This gentle breed is highly affectionate and will be the perfect cuddly companion for every family member.

Do American Bullies Get Along With Other Pets?

American Bullies typically get along well with other dogs and even other animals. That being said, you will have the best luck with this if your American Bully is well-socialized from a young age and if you are careful with your introductions. Individual personalities also factor in when it comes to how animals relate to one another.

If you are bringing an American Bully into a household with one or more other pets, take steps to help them get to know each other in a safe, positive way.

No, American Bullies usually are not very loud. When they do open their mouths and emit a bark, you will hear it. But they do not do it often or for no reason. These dogs are pretty quiet most of the time. 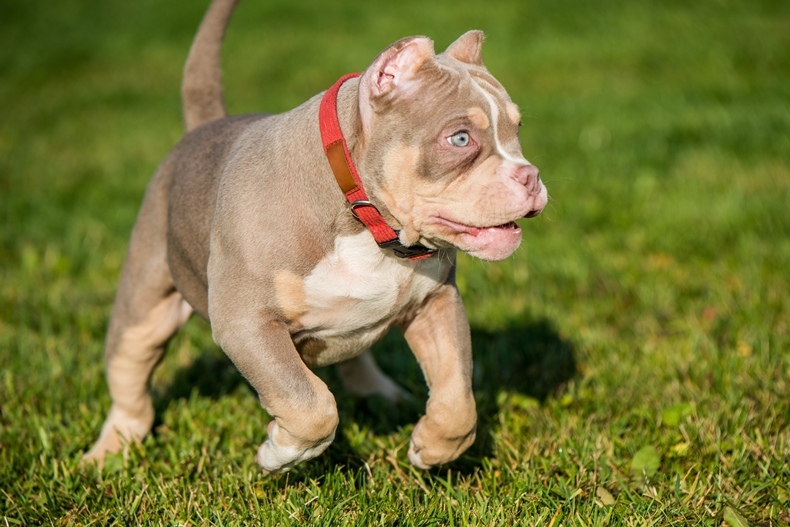 Another step toward finding out whether an American Bully is right for you is to learn about the care needs of these dogs. Let's talk about what your Bully will need from you regarding exercise, grooming, training, diet, and nutrition.

American Bullies are high-energy dogs that love to exercise and play. So, your Bully will need anywhere from half an hour to an hour of daily exercise.

Since these are such sociable dogs, it is ideal if you are participating in some or all of that daily exercise. But you can also provide your dog with toys to entertain himself and burn off excess energy when you are too busy for a walk or a full hour of playtime.

You can expect low to average shedding from the American Bully. Moreover, grooming this breed's short, smooth coat is fast and easy using a bristle brush. Rub down the coat after you are done brushing to give it a nice shine.

You also should clean your Bully's ears and teeth regularly and schedule a bath now and again.

One of the best things about the American Bully Pit is how easy this breed is to train. American Bullies are intelligent and highly motivated to please their owners. This combination of traits means they are enthusiastic about training sessions and quickly understand what you want them to do.

American Bullies need to eat a balanced diet that is rich in nutrition. To figure out how much food to give your dog, weigh your pet and then multiply 30 calories by your dog's weight in pounds to determine the daily calorie requirement.

Here are some of the health problems that American Bullies are prone to developing:

There are also American Bullies that sometimes develop health problems due to how their breeders treat them. Unethical breeders who hope to fetch a higher price for American Bullies may attempt to bulk them out using steroids.

After the new owner purchases the dog, obviously the steroid use comes to an end. The dog then loses some of his mass. He is then left with health issues plaguing his joints and organs.

For this reason, it is essential to research when choosing a breeder (see the next section).

What Does an American Bully Cost?

Where to Adopt or Buy an American Bully Pit 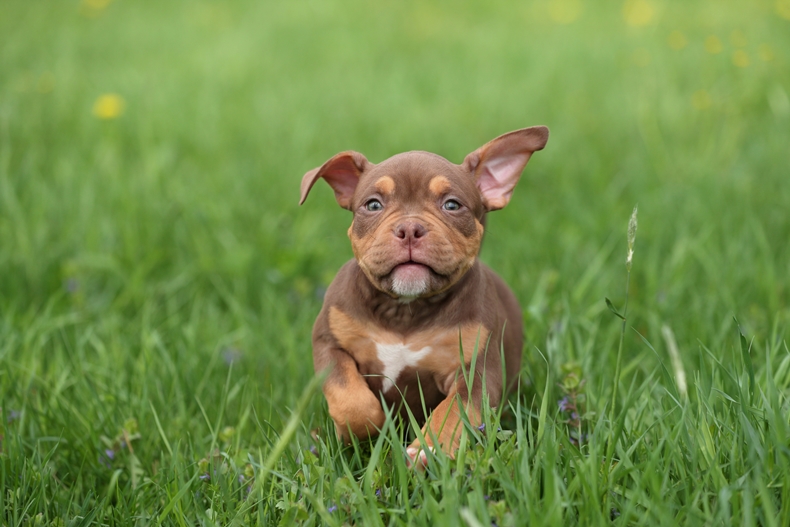 If you are excited to have an affectionate new cuddle buddy in your home, you might be ready to start looking into your options for buying or adopting an American Bully.

Here are a few breeders to consider for American Bullies:

Other options for buying or adopting American Bullies include Lancaster Puppies and Puppies.com. You can also contact local shelters to see if any American Bullies are awaiting adoption in your area.

Despite its strong resemblance to the American Pit Bull Terrier, the American Bully is a separate dog breed. While many people assume that American Bullies are aggressive, this is a misconception, just as with other Pit Bull type dogs.

The true personality of the American Bully is friendly, sociable, gentle, and loyal. If you bring home an American Bully, you’ll have a buddy that will be just as enthusiastic about a cuddle session on the couch as he will be about an energetic play or training session. You’ll also have a friend for life who will be a close companion to every member of the family.

Is an American Bully aggressive?
Generally speaking, no. You can find anecdotal reports of aggression among American Bullies, but these dogs are usually gentle. In fact, UKC says, "Aggressive behavior towards humans is uncharacteristic of the breed." If a dog exhibits viciousness, that is a disqualifying criteria.

Should you crop your American Bully Pit’s ears?
No. In the days when dogs were bred to work, sometimes their ears were cropped for practical reasons, as it could reduce the chances the pet would get injured on the job (or in a pit fight).

Dogs today rarely live in circumstances that put them at this risk. Cropping their ears serves no purpose and has no medical advantage. It is a painful and pointless mutilation. It is common to perform on American Bullies because some people think it makes them look tough, but it will do nothing but harm your pet.